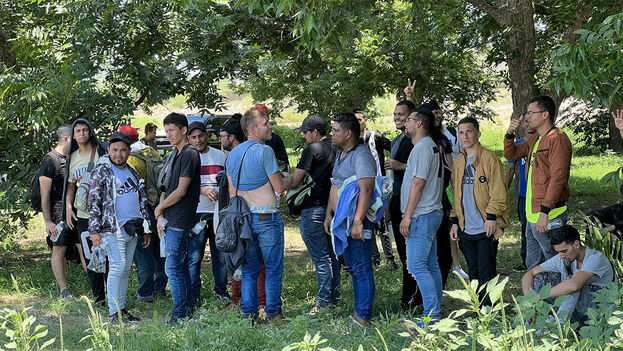 Hundreds and hundreds of people in single file, from one bank to the other of the Rio Grande, in an incessant flow like the waters that cross. The images, recorded on the river border of Piedras Negras (Mexico) with Eagle Pass (Texas) and shared this Monday by the American journalist Bill Melugin, put meat to the aseptic figures.

According to the Fox News reporter, last week there were more than 13,000 illegal crossings in the same area: “That’s almost 2,000 a day.” A federal source told him that 2,258 illegal immigrants arrived on Wednesday. Matías, a source from the Mexican prosecutor’s office in Coahuila who prefers not to give his last name, tells 14ymedio that between Sunday and Tuesday more than 8,000 people crossed the border strip of about 90 kilometers between Ciudad Acuña and Piedras Negras, including “several family groups.”

The official also says that the Northeast cartel has taken over the traffic of Cubans, Venezuelans and Nicaraguans in the place. “Count on hawks -children, vendors, bartenders- who inform them of the free points to cross migrants through the Rio Grande”, he details.

Two coyotes were seen precisely in the images shared by Bill Melugin, revealing the way they operate: once they leave the group, they return to Mexican territory to guide another.

The arrival of Cubans in the US has reached unprecedented figures during the Joe Biden administration. Data offered by the Department of Customs and Border Protection show that in the last eight months a total of 140,602 Cubansa figure that already exceeds the Mariel exodus of 1980, when 125,000 people reached the United States in seven months.

The official also says that the Northeast cartel has taken over the traffic of Cubans, Venezuelans and Nicaraguans in the place

Matías knows that the undocumented immigrants who come in a caravan “reach the limits and some residents near the Rio Grande support them free of charge so that they can achieve their American dream.”

Those who arrive by bus are “detected by the hawks, who warn the coyotes about the places where people are. Either under threat or extortion but they end up agreeing to spend with these smugglers the river”, mentions Matías. “They charge them between 600 and 1,000 dollars to cross them and they abandon them while they are there”. This network also brings migrants from Tabasco and Yucatán.

The Northeast cartel –a split, in turn, from the old Gulf cartel–, a bloodthirsty group that is not only dedicated to transporting drugs, but also to extortion, kidnapping, homicides, fuel theft, bank robbery and human trafficking.

Cuban Francisco Torné Martínez is not part of the group filmed on Monday, but he could have been. He stepped on US territory this Wednesday. “They took names and divided the group of more than 200 people, they put the Peruvians and the Guatemalans on a bus to return them over the bridge,” he refers to this newspaper.

Torné was taken along with 22 other Cubans, 39 Venezuelans and 9 Nicaraguans to a church. “Texas is returning to those from El Salvador, Honduras, Haiti and Guatemala, but this could change as a result of Texas Governor Greg Abbott intensifying his campaign,” says official Matías.

Hundreds and hundreds of people in single file, from one

Relatives of the political prisoner Walter Gómez published a spoken

Intensify police presence at stops and stations of the Metro

In addition, the units of the National Directorate

Cuban opponent Guillermo Fariñas, released four days after his arrest, prior to 11J

The airline Air Canada will connect, as of October 28, Tokyo and Havana with a stopover

The Cuban police should have protected him, but ended up killing 17-year-old Zidane

When Zinédine Zidane Batista Álvarez was born, 17 years ago, his own father, Yosvany, wrote his