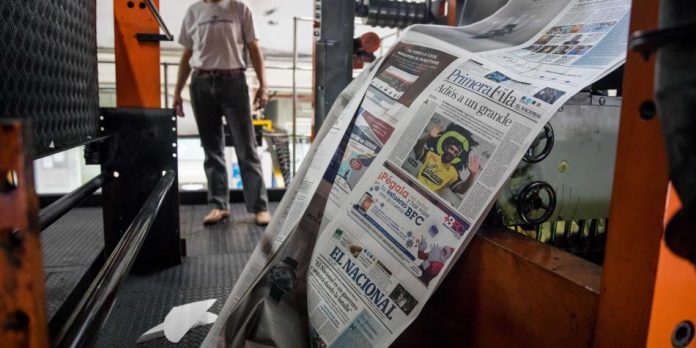 Until five years ago, the keyboards of the computers sounded almost nonstop in that two-story building and spaces full of journalists and interviewees in Caracas. Between 60,000 and 80,000 weekly copies came out of the press and on Sundays some 250,000 newspapers were printed and arrived at the homes of Venezuelans first thing in the morning: everyone wanted to read The National.

But that changed in 2018, when after years of reprisals from the Chavista government, the newspaper was forced to stop circulating in its printed format and dedicate itself only to its digital page when the Maneiro Corporation – a state company in charge of granting paper to newspapers Venezuelans – refused to provide the resource.

Thus began a crusade that continues to this day: an arduous and constant struggle to survive amid state-ordered digital blockades.

“The fall in traffic means that we receive fewer notices and that they stop advertising with us, but we continue to resist. We are going to publish the headline: ‘Venezuela returns to democracy’, emphasized Miguel Henrique Otero, director of the newspaper and who, from exile, is committed to saving the newspaper founded by his father and grandfather.

Since 1943, the ideas made paper and ink of the newspaper founded by Miguel Otero Silva survived the attacks of the dictatorship, saw the birth of democracy and fought to continue doing journalism in a troubled country. However, under the government of Nicolás Maduro, things for The National they became complex. Four years ago, when it was time to turn off the press, not only did the newspaper stop circulating, but also the other publications, including magazines, books and inserts, which depended on said operation.

Through administrative and bureaucratic obstacles, the Maneiro Corporation submitted to the media. The representatives of the newspapers constantly made the request that always resulted in negative responses and even, for a few months, foreign newspapers helped The National and other forms, but over time the situation became unsustainable.

El Tiempo tried to find out the official version of the National Telecommunications Commission (Conatel) about internet blockades, but there was no response.

The Ministry of Popular Power for Communication and Information has not made a statement either, despite the complaints made by the union about internet access.

According to the National College of Journalists (CNP), for the year 2000, there were 136 print media in the country, of which at least 61 have disappeared in recent years. In contrast, the NGO Espacio Público estimates that 82 newspapers went out of circulation.

And although the digital migration had begun long before the end of paper, as a harbinger of what the pressure of the State against newspapers would imply, especially on the most critical ones; currently the suffocation continues on several sides. The first of them, the limited and poor internet access in Venezuela.

According to the latest Conatel report, by 2020 the number of users and internet penetration fell drastically by 6.9 percent and 4.76 percent, respectively. In other words, there are fewer Internet users in the country than in 2014.

Miguel Henrique Otero – And now, against the Venezuelan NGOs https://t.co/xecM5mYLdx via @ElNacionalWeb

It is no longer just the constant blocking of media website domains by the government. To read The National from Venezuela you need to use a special VPN connection from the device you are trying to enter, a maneuver that few know or that, even if they know, few are willing to carry out given that the majority of citizens use their mobile data as Internet connection. And that translates into a low number of visits and advertisers that harm the stability of the newspaper.

“They even took the building from us, an outrage that has no name. And this year, the policy is to block our website,” Miguel Henrique Otero tells El Tiempo, recalling how through a court order for a lawsuit imposed by the number two of Chavismo, Diosdado Cabello, the main headquarters of the media It was handed over to the also deputy of the United Socialist Party of Venezuela (PSUV), in addition to demanding 13,000,000 dollars.

“From a legal point of view, for the government of Ripe could block the website, it was necessary to go to a federal judge because the site is hosted in the United States,” explains Otero, alleging that it is not only the State operator, the National Telephone Company of Venezuela (Cantv), but also private ones that put pressure on the newspaper and that they are “fulfilling an order that is not judicial, an order that is arbitrary.”

The worrying thing is that what happens to The National it is a reply in the critical media against the government. And it is that exercising journalism in Venezuela is not an easy task. In recent years it has become a constant struggle with the power structure, given that there is no law on access to information, which is why it is complex in the country to reach official sources when working for an independent media outlet, no affinity with the ruling party.

That added to the fact that it is exposed to multiple risks and with fewer jobs. According to the CNP, between January and May of this year, there have been 10 harassments, eight intimidations, 13 smear campaigns, three cases of deleted materials, 21 coverage impediments, one physical assault, 11 blockages of digital media and four closures of stations.

“The Venezuelan government adopted as a policy the aggression, harassment and persecution of the press”, is how Édgar Cárdenas, general secretary of the CNP, considers it. On the other hand, Espacio Público recorded that between 2003 and 2022, 190 websites have been blocked.

“What has happened with The National and the rest of the newspapers is a very hard blow and a very dark stage for journalism”, says sadly Maru Morales, who for seven years was one of the leading writers of that newspaper.

Morales, who writes for other media, is filled with nostalgia when he remembers what was his home and how in 2013 the circulation began to drop and the pages were reduced.

“It was a dramatic transition. As a journalist, you lose a source of employment; As a citizen, you go to a kiosk and see few newspapers, with partial information, without criticism or denunciation”, laments the journalist.

And it is that for any journalist it was a dream to work in The National. Students expected to be able to write for the country’s leading newspaper, and any columnist wanted to see his name in the print edition.

Today, Venezuelans live in deep misinformation, which has led to social networks, especially Twitter, being one of the most used tools to spread government criticism. However, they are far from the deep and well-proven journalism that newspapers like The National they try to promote.

That yes, in spite of the dark panorama, the hope follows intact. “We continue and we will continue reporting,” emphasizes Otero, thanking the Grupo de Diarios de América for accompanying The National in this transit of 20 years, which began with the arrival of Chavism and XXI century socialism in Venezuela. “I say it again, we are going to publish the headline ‘Venezuela returns to democracy’,” he said.

Until five years ago, the keyboards of the computers sounded

Manzur: "Argentina was one of the countries that obtained the most vaccines"

Manzur highlighted the actions carried out by the Government during

Brazil has 3,400 points for receiving electronic products for recycling.

Three people were killed and 11 wounded in a shooting

Manzur: "Argentina was one of the countries that obtained the most vaccines"

They arrested a subject with 26 drug panels  

Photo File As usual, every week Netflix updates its catalog of titles available around the world.

Children and adolescents from various schools in western Caracas arouse their curiosity about technology, mechanics and