The tax on the dollar, the increase in procedures before the Saren, the lack of financing and unfair competition against imported goods exempt from tariffs are some of the elements that harmed industrial growth during the first three months of the year

After a full year of continuous growth in industry production levels, the upward curve seems to have peaked, as no consistent increase was recorded during the first quarter of 2022.

According to the Industrial Situation Survey of the first quarter of 2022, published by the Venezuelan Confederation of Industrialists (Conindustria), the use of the installed capacity of the industry stood at 27.6% this quarter, registering a variation of just 0.6% compared to the previous period .

During 2021, this percentage evolved from 19% in the first quarter, to 21% in the second, 25% in the third and closed at 27%, showing an evolution over the months that seems to have stopped in this first quarter of 2022.

This first quarter of the year was subject to several changes for the economic dynamics. The National Assembly (AN) administered by Chavismo promulgated the reform of the Law of Registries and Notaries which increased the cost of procedures before the Autonomous Service of Registries and Notaries (Saren), and a reform of the Tax Law on Large Financial Transactions with which foreign currency transactions began to be taxed.

On the other hand, the barriers that hindered growth, such as the absence of bank credit and therefore of financing, as well as the exemption from import tariffs on thousands of finished products, remained in this quarter.

This combination of factors caused growth to slow down during these first three months of the year and calls into question the progress of productivity in the coming months.

In this sense, Pisella is emphatic in clarifying that the growth of 2021 is not, under any circumstances, synonymous with full functionality, but rather with a slight rebound and expectations of improvement.

“When we say that we are at 27% of our installed capacity, we are not at a break-even point, many produce at a loss. Venezuela has not been fixed, but we have to fix it. They seem to believe that the industry is skin deep to receive new taxes, but it is not so », he declared.

*Also read: The Venezuela that “was not fixed”: The collapse of the national industry

Although the operational capacity of the industry has stopped increasing, the expectations of the industrialists seem to be getting better and their individual results have improved slightly.

From the second quarter of 2021, expectations regarding the increase in production have improved substantially. Just 25% of those surveyed pointed to a positive direction when asked in March 2021 if they would improve production. Now 64% expect to increase their production for the next quarter. 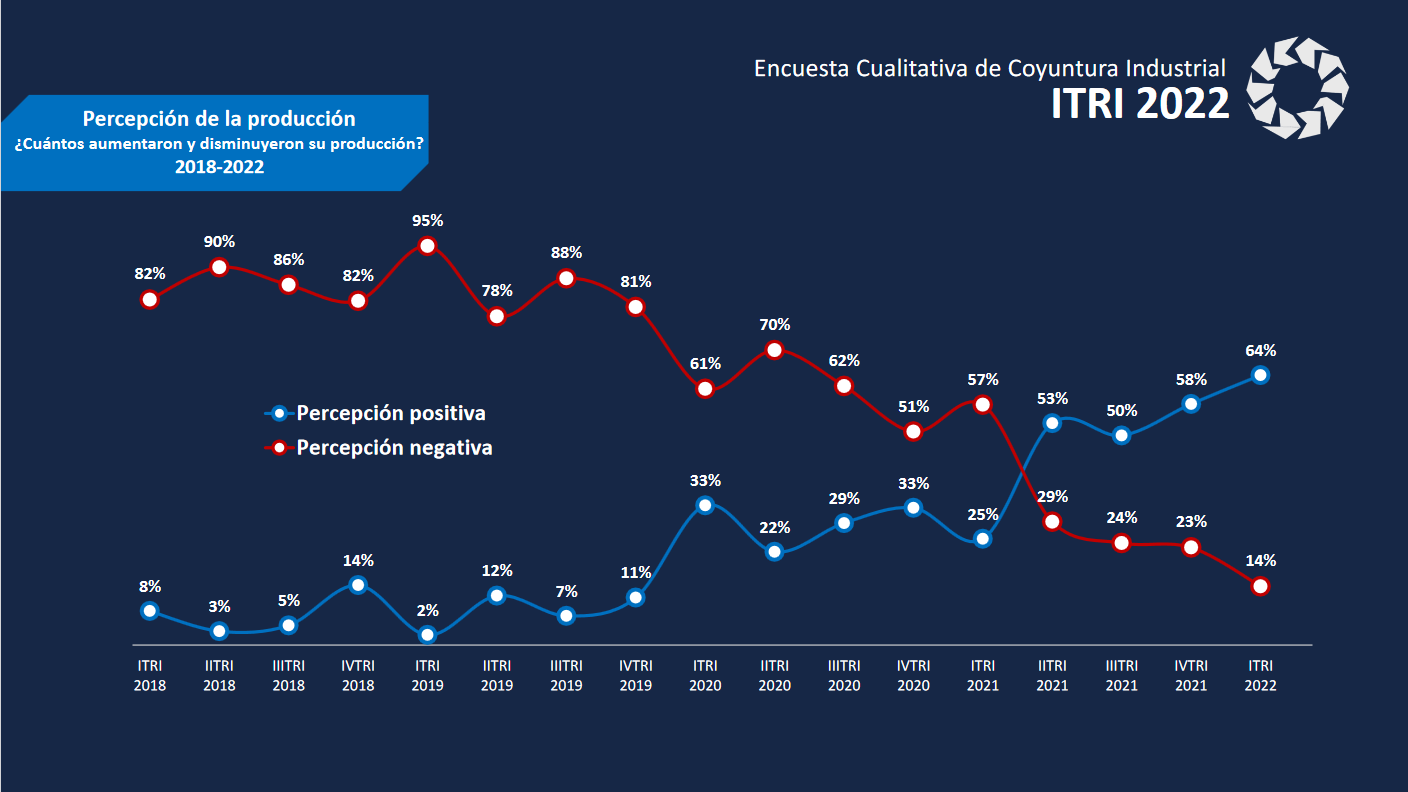 In general, the perception of industrialists regarding the economic situation in the coming months is positive. About 90% of those surveyed think that in 12 months the outlook for the Venezuelan economy will be the same or better.

This is reflected in investments, which have increased in recent months. 27% of the industry invested more money than in the first quarter of 2021, while 57% maintained their investment levels. Only 16% invested less.

Despite the improvement in investments, the overwhelming majority of 77% had to stay in the realm of operating and inventory investments. In very few cases was an injection of money to improve or optimize processes observed.

On the other hand, 64% of the companies surveyed increased their production when compared to the first quarter of 2021. Only 14% decreased and 3% did not produce throughout the year.

According to Pisella, one of the main focuses of the industrial sector is to recover employment and improve the purchasing power of the worker. These are not sugar-coated promises, but a necessity for the Venezuelan economy.

Consumption must increase for production to pick up. If the population does not have enough money to consume what industry produces, companies cannot grow.

In this sense, during 2021 there was a significant increase in wages and a timid increase in jobs. According to the survey, when comparing with the first quarter of 2021, 29% of companies have increased the level of employment “slightly”, while in 53% of cases it remained the same. Only 18% of those surveyed indicated that it got worse.

The expectations for the next quarter are not encouraging. Despite the fact that only 10% estimate a reduction in personnel, the majority of 64% anticipate that the same numbers will remain, while 27% expect to hire workers in the year.

Regarding salary, the improvement compared to the first quarter is substantial. The average remuneration of the lowest rank, that of workers and operators, grew by 67% from $78 to $130 per month; that of professionals and technicians by 97%, rising from $172 to $339 per month; and that of managers increased 88% from $414 to $779 per month.

However, when comparing directly with last quarter, the results are similar. In fact, the blue-collar staff averages $8 less than at the end of 2021. The average salaries of professionals, technicians, and managers did grow in the last three months. 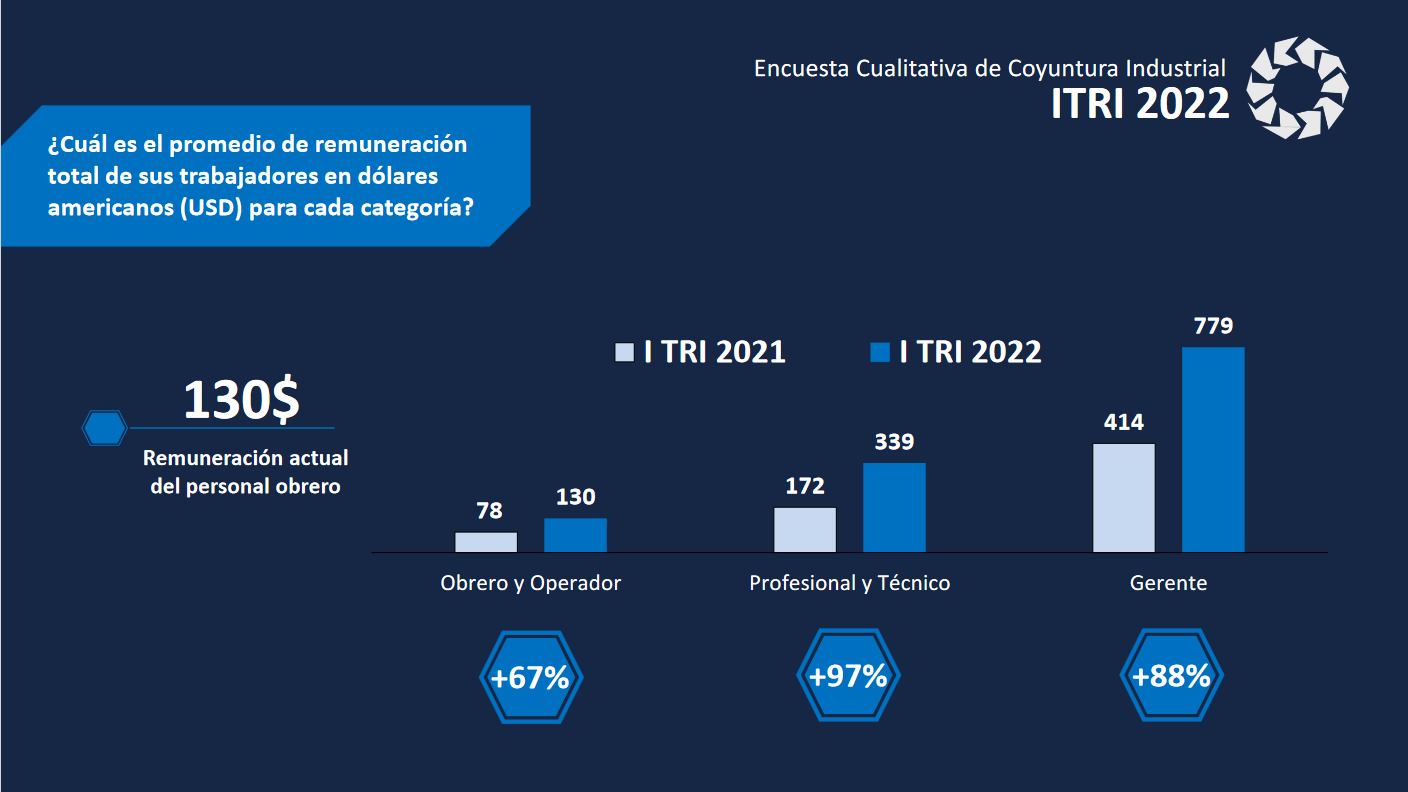 Finally, the Conindustria survey inquired about the main factors that harm production and most of the respondents agreed on the following five: 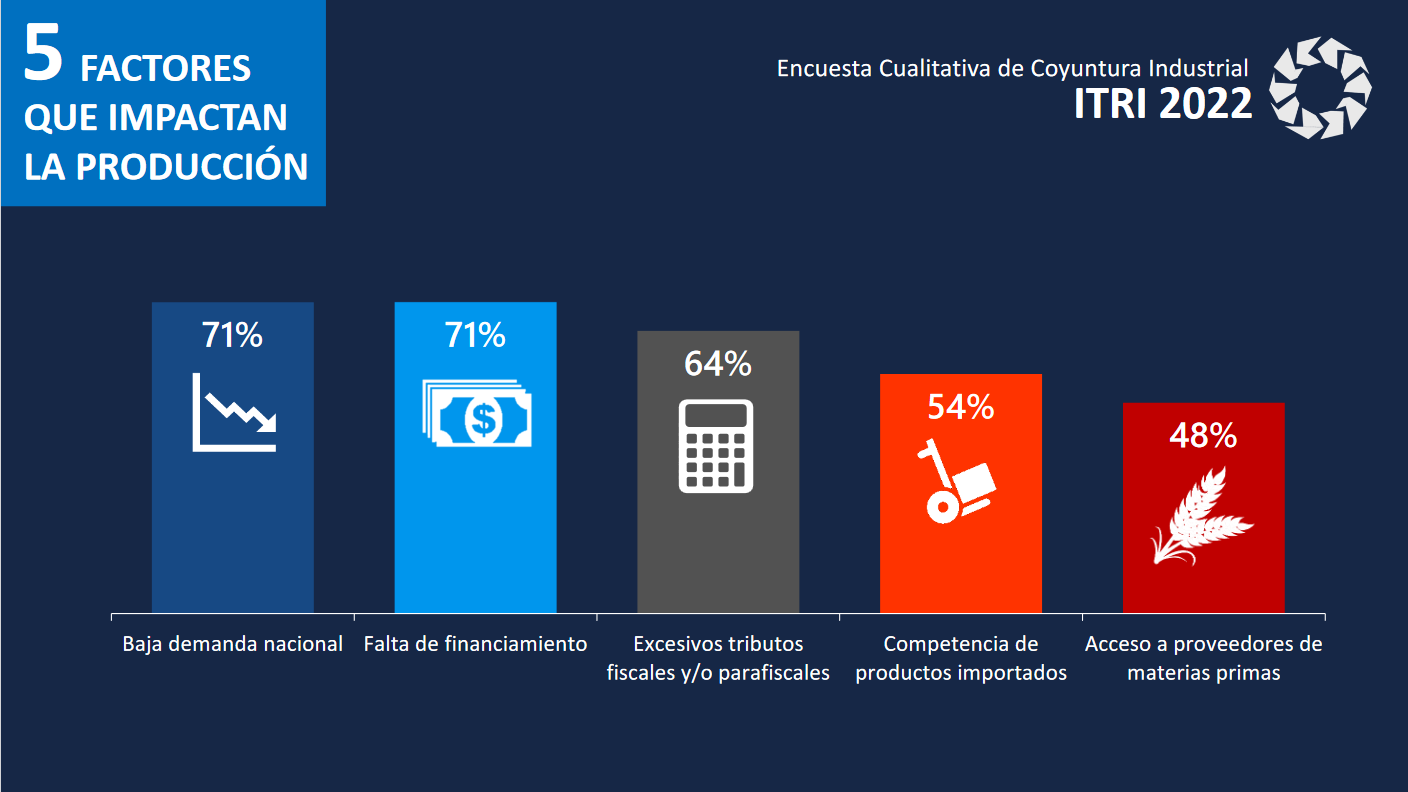 *Also read: Why are imported products cheaper than national ones?

Access to suppliers of raw materials: Acquiring raw materials is difficult, often due to the obstacles imposed by the Government itself due to its bureaucratic procedures.

Honduras contracts the services of Cuba to "refound" their educational system

The actions of the Brazilian state oil company Petrobras collapsed

The retired general of the Nicaraguan Army Humberto Ortega, brother

Agriculture set the price of the raw material of yerba mate

Jorge Rodríguez met with the president of Colombia

The president of the National Assembly, Jorge Rodríguez, held a meeting with the Colombian president, Gustavo

According to surveys by private consultants, the BCV placed maximum amounts of between $170 million and

Through Banco Bicentenario’s multi-platform, customers will be able to cancel the services of the National Telephone

Lula will meet this Monday with Jorge Rodríguez in Brazil

In the day of bilateral meetings that the recently sworn-in president of Brazil, Luiz Inácio Lula

Conindustria insists on the need to allow loans in dollars

Conindustria expects the Venezuelan industrial sector to grow 7% in 2023, if access to credit in