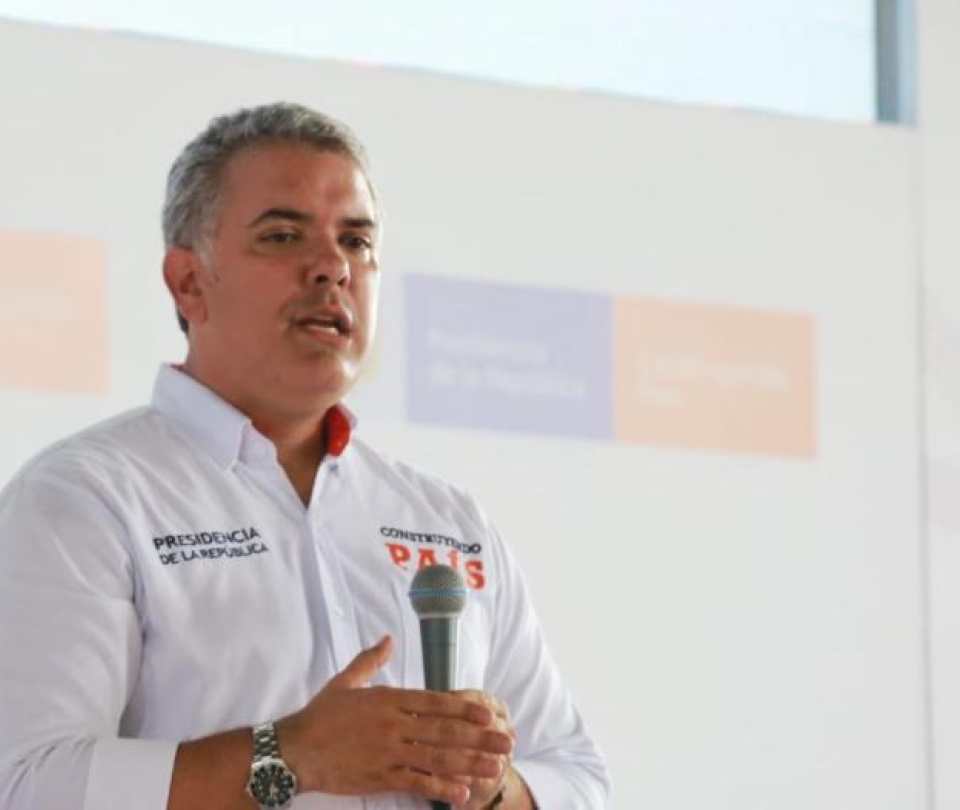 The decision of the Government of Joe Biden, to ease some of its sanctions on Venezuela, was celebrated by President Iván Duquewho considered that this is due to the policy of the “diplomatic encirclement” driven by him.

(What does the change in US position towards Venezuela mean).

Duque also applauded the promotion of dialogue between the Nicolás Maduro regime and the opposition that has been advancing, with setbacks, in Mexico, because it represents a “a triumph of the Venezuelan democratic resistance and, furthermore, it is a triumph of the diplomatic siege.”

The head of state also assured that Maduro did not achieve his goal of freeing Álex Saab, detained in a prison in the United States and that it was one of the conditions of the ruling party to advance at the table in a conversation with the opposition.

“Maduro had said that he would not sit down again until Saab was released, and he was not released; he is extradited and will remain on trial. In addition, international pressure led him (Maduro) to have to sit down again with the democratic resistance to seek the return of democracy to that country”, Duke argued.

(The economic sanctions that the United States lifted on Venezuela).

“There is a triumph of diplomatic pressure from the United States, for which it practically has to recognize all the outrages that were committed in the past against oil companies in that country and a production chain must also be resumed,” said the president of Colombia.

“The message that the countries that have been participating in that siege and that have participated in the pressure against that dictatorship must continue to have is to keep it alive so that it can return to democracy,” Duke reiterated.

In the last few hours, the US government surprised by announcing the relaxation of some sanctions that weighed against the Venezuelan regime of Nicolás Maduro.

This decision, moreover, was known hours after President Joe Biden made a similar gesture of lifting some of the restrictions against Cuba reimposed during Donald Trump’s four years in the White House.

Regarding Venezuela, Washington will grant a limited license to the US oil group Chevron so that it can negotiate directly with the Venezuelan state oil company PDVSA.

This would seek to pressure for the reestablishment of negotiations in Mexico between the ruling party and the opposition, which were left in a deadlock after the extradition of Álex Saab from Cape Verde to the US.

If the negotiations are successful, then the US will allow the company to extract and sell Venezuelan oil.

In this sense, a senior US official clarified that it is a “Limited License” that allows Chevron to negotiate the terms of possible future activities in Venezuela, but “It does not allow closing any new agreement with PDVSA.”

After Washington’s announcement, Caracas called for the “absolute lifting” of the sanctions.

“Venezuela aspires that these decisions of the United States of America pave the way for the absolute lifting of the illegal sanctions that affect all of our people,” Vice President Delcy Rodríguez wrote on Twitter.

Duque, for his part, considers that this decision is important for the Venezuelan people to return to democracy, “Because that is why the table is being held in Mexico, so that there is a return to democracy. I think that is the reading that must be taken and it also seems to me that the message that we continue to have as countries, that we have participated in that siege and that we have participated in that opposition against the dictatorship, is to keep it alive so that democracy returns to Venezuela”.

Duque describes rapprochements between the US and Venezuela as a ‘triumph’

The decision of the Government of Joe Biden, to ease

Mexico “will not take a step back” in hiring Cuban doctors, says López Obtrador

The rise in the Fed rate is a challenge for Banxico, says Galia Borja

Two weeks ago, the Fed raised its reference interest rates

Mexico “will not take a step back” in hiring Cuban doctors, says López Obtrador

Bogotá will have a third stadium for Colombian professional soccer

“Egan is with Fico”, the cyclist made it clear who he will vote for and tells the left: “Work together to make the progress we all want”

The cyclist Egan Bernal, has commented on politics in Colombia and there the dilemma: some ask

High volatility in prices will affect the electricity market

It’s been several months since the Russian invasion of Ukraine began. Which has brought an economic