The Superior Court of Justice of Arequipa resorted to an unusual strategya so that the stoppage of unionized workers does not affect the litigants or citizens who carry out procedures or processes in the institution.

The decision was to weld the bars of the main entrance so that you are left open and cannot be closed, in order to spoil the attempt of the demonstrators, which was to prevent the entry of the magistrates, secretaries and litigants.

the secretary of the Union of Workers of the Judiciary in ArequipaMarlene Huaranca, stated that this measure was taken for the first time, knowing that today the 24-hour preventive strike was being carried out to demand compliance with the remuneration scale.

They ask the Government to consider in the budget law of the 2023 the budget of 215 million soles to comply with the third part of the remuneration scale, which would be an increase of approximately 600 soles.

However, during the morning, the servers still prevented people from entering because they managed to do the human blockade.

Faced with such a situation, the Superior Court of Justice of Arequipa returned to desolder the bars so that they can be closed and opened.

The only hearings that are held are for people with preliminary detention. 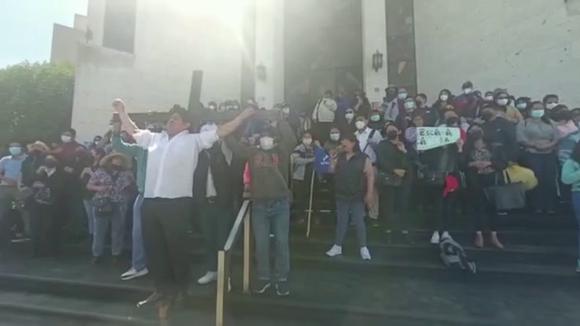 The Superior Court of Justice of Arequipa welded the bars to leave them open and prevent the protesters from closing the doors, but before the human blockade, they unweld them

Doors of the Judiciary of Arequipa are welded and unwelded, due to workers’ strike (VIDEO)

The Superior Court of Justice of Arequipa resorted to an

By Olga Verges Cristian Rojas, national president of the Dominican

The toll rate rises from next September 1: the new prices

The toll rate rises from next September 1: the new

For more than a year, the residents of Costanera Street

The euro Traded at its lowest level in two decades on Wednesday, stocks fell and German

Yenifer Paredes: At 10 am, the request for preventive detention hearing will continue

Can regional governments pay for studies for students with high grades, as candidate Jorge Mera proposed?

If I am denied a visa to the United States, what options do I have?

The government of USA You approve most of the visa applications that are submitted, but you

Mondelez is awarded for its innovation in Technology