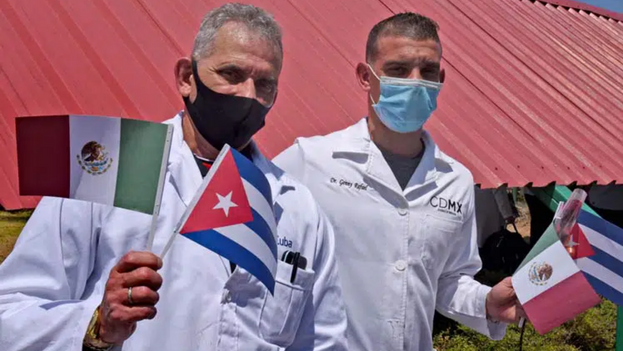 a few hours after a Puebla judge decides if Mexico can hire 500 Cuban doctors Under the conditions agreed between the governments of both countries, the health workers from the island arrived in the North American country on Tuesday.

“They have already arrived and are in Mexico in three hotels, whether they are doctors or not, we don’t know, but they are here,” confirmed Éctor Jaime Ramírez Barba, deputy of the National Action Party (PAN) for Guanajuato. The politician argued that, taking into account the number of toilets that the federal government plans to hire, Cubans do not represent a disproportionate number, although at the time opposed the deal.

“If they are doctors, there is no formal decree that prevents the president today from incorporating the clinical entity, if he does not comply with what the jurisdiction dictates, we will be making the corresponding complaints,” said Ramírez Barba to the local press. If the data available to the opposition, provided by the government, are true, the number of Cuban toilets in Mexico would be two for every 10,000 nationals.

“If they are doctors, there is no formal decree that prevents the president today from incorporating the clinical entity, if he does not comply with what the jurisdiction dictates, we will be making the corresponding complaints”

However, the complaints are focused on issues such as whether the group is made up entirely of health professionals, if they are duly trained and if the working conditions are respectful of the law, something very doubtful considering the number of complaints that qualify agreements of this type as a semi-slavery relationship.

The anonymous complainant who is trying to stop the incorporation of the 500 doctors stated in the request that the Mexican government has not shown that the doctors have the capacity or adequate training to practice medicine in Mexico and that the compensation of the health workers could go to stop, as in all agreements of this type, to the Cuban government instead of professionals.

The judge denied the provisional suspension because “so far it has not been noticed that the agreement signed by the federal government contravenes public order provisions,” but he gave until yesterday for the authorities to present their allegations and it is expected that this Wednesday will make known your decision.

This Tuesday, the PAN deputy explained that the model in which Cubans will work is the one planned for dispersed areas, which are organized by health communities. The politician commented that the Mexican doctors who go to these areas do so temporarily, with a one-year contract that provides them with points for their next destination, so they do not qualify as vacancies. However, the national toilets refuse to occupy these places.

By virtue of the agreement announced by the Mexican president, Andrés Manuel López Obrador, during his visit to Havana on May 8, the Cubans will go to these places, some of them in very dangerous areas, such as the Montaña de Guerrero, one of the most conflictive points of the country, due to the presence of several cartels that dispute the transfer of drugs.

The medical profession in Cuba, which was once the jewel in the crown, is losing its appeal and not only within the Island, since the missions, often used to earn more money but also as a springboard to emigrate, are becoming making more complicated. This Tuesday the news spread on networks that at least 17 Cuban doctors displaced to Venezuela were detained when they tried to leave for Colombia.

Some have been sent back to the island as prisoners and threatened with the application of article 176 of the new Penal Code, which is punishable by between three and eight years in prison.

Doctor Miguel Ángel Ruano recounted on his Facebook profile that some have been sent back to the island as prisoners and threatened with the application of article 176 of the new Penal Code, which punishes with between three and eight years in prison those who “in occasion of the fulfillment of a mission abroad and against the express order of the Government, is transferred to another country”.

Emilio Arteaga Pérez, a member of the Free Cuban Medical Guild like Ruano, confirmed the facts and maintained that the rest of the 20,000 Cuban collaborators in Venezuela have also had their passports withdrawn as retaliation and a preventive measure.

Under these conditions, it is not surprising that the majority of Cubans who still have public health as a vocation choose the only path that opens the door for them to leave the island, which is Comprehensive General Medicine. Specialist doctors are regulated since 2015 and are prohibited from leaving the island for five years, after which they can request their “release”, at the expense of the authorities’ decision.

The advice not to specialize so as not to close the door to emigrate circulates in several medical forums, one of them being that of those based in Spain, where many Cubans fight to have their degrees homologated in a country where more and more doctors are imported while nationals emigrate.

In the last five years, 20,608 foreign doctors approved their titles in Spain. Cubans were on the podium of the countries with the most admissions in 2018, 2020 and 2021, with 342, 598 and 564 respectively. Most of them know that in order to work in the European country they need the permission of the Cuban Ministry of Foreign Affairs, from which they must request the required documentation to be able to validate their titles. To do so, they must have completed social service and, of course, not be regulated or marked for “defection”, otherwise they will never get the papers.

In addition, they frequently need to complement their studies to match their level to that required and pass the MIR exam (Resident Internal Medicine) in case they want a specialty other than family medicine.

Trade unions in Spain warn of the shortage of doctors in the countrys, where wages are low and the workload very high, especially compared to some of the neighboring European countries, where there is more stability and better conditions, which meant that in the last five years they applied for the certificate of suitability for 11,506 Spanish health workers left, while, in the same period, almost twice as many foreign graduates validated their title: 20,608.

a few hours after a Puebla judge decides if Mexico

“For example, the Philippines has its very bureaucratic processes and

They will delay accusations until they are buried

Within the spirits of the Prosecutor’s Office are not the

An old man and ex-combatant in Angola commits suicide after receiving a fine of 4,000 pesos

“It’s unfair what they did to that poor old man,” said the daughter of Ángel Pacheco

The industry of Ciego de Ávila, unable to assimilate the extraordinary pineapple harvest

Charging in freely convertible currency (MLC), one of the main incentives of the famous 63 measures

"I hope that the sentence that you decide, Madam Judge, is that of your conscience"

“In Sancti Spíritus we are not used to landslides,” lamented a resident of this city in