A few days ago it transpired that, by four votes to one, the Board of Directors of the INDDHH admitted the Center for Human Rights Studies of Uruguay in its registry of social organizations. The only re-elected director of the INDDHH, Wilder Tayler, (who voted against the acceptance of the organization) said that “the co-optation of entities that tolerate the denial of human rights should not be allowed”, and stressed that “there are limits that should not be passed”.

The Center for Human Rights Studies of Uruguay is chaired by Sergio Hugo Molaguero Brescia, and the vice-presidency is occupied by Graciela Rompani (widow of Jorge Pacheco Areco, president of the Republic between December 6, 1967 and March 1, 1972) . 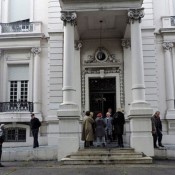 The National Institution of Human Rights and Ombudsman (INDDHH) accepted, for…

In the last few hours, Crysol approved a statement through which it expresses its total rejection of the decision of the majority of the INDDHH’s Board of Directors to register the Center for Human Rights Studies in the Institution’s registry, “because it is an organization that does not meet the elementary conditions to be accepted to participate”.

“Her denial of the 197 forced disappearances of citizens during the civil-military dictatorship, her passionate defense of those responsible for the most serious crimes that were prosecuted are a clear example of not meeting the essential conditions to be registered in the Institution that has as committed to protect, promote and defend human rights”, Crysol remarked in its statement.

“We repudiate the persistent campaign of the morning newspaper El País, which was the official spokesperson for state terrorism, against the INDDHH and its editorials aimed at intimidating and disciplining the new authorities,” added Crysol.

The organization recalls that from the Nuremberg Tribunal, which judged the main Nazi leaders at the end of World War II, to the Rome Statute of the International Criminal Court, “are the officials of the State or those who act on their behalf, with their authorization or acquiescence, those who violate human rights and their actions can never be equated or equal to those carried out by individuals, either individually or collectively.”

Crysol also expresses that in order to affirm justice and democracy, it reiterates that “the most serious crimes in the country’s history cannot go unpunished.”

“They were committed by State officials, civilians, military and police, who had to prevent them from happening. They must be investigated, clarified and punished by the power of the State, which has the constitutional prerogatives to do so, providing the maximum guarantees to all those involved, as has been the case up to the present”, remarks the organization of former political prisoners of Uruguay.

At the same time, Crysol ratifies its commitment to support and endorse the INDDHH as a great conquest of the workers and the Uruguayan people to affirm the human rights norms that are a “great conquest of humanity although, it seems, that the current authorities they do not share such a point of view.”

President Maduro: we start this 2023 full of joy and optimism

«2023 has arrived! We start this year with joy and

The President of the Nation, Alberto Fernandez, along with a

Archbishop of La Paz before Camacho’s arrest: “We know the unfortunate situation of Bolivian justice”

Seven governors of the North take office this Sunday

Clécio Luís, from Solidariedade, who will govern Amapá, was the

After the ups and downs of 2022, the livestock market closes the year with a slight rebound