The statements made by the President of the Council of Ministers, Aníbal Torres, on the Armed Forces and the National Police of Peru (PNP) generated criticism and questioning from various congressmen from different benches.

This Thursday, in the Decentralized Council of Ministers in Cajamarca and in the context of a recent kidnapping of journalists perpetrated by patrolmen in Chota to read a statement under duress, the prime minister highlighted the work of the patrols.

“(The peasant rounds) really and effectively fought crime, the cattle rustling, theft, crimes against property in general, violence against women disappeared,” he said.

LOOK: Taxi driver by application was shot by false passengers to avoid theft of his car: “They wanted to kill him”

“We would already like our police forces and our armed forces to provide the same security to the entire country,” added the head of the PCM.

“[Debe pedir disculpas] Of course, because it is a repetitive behavior. Unfortunately, the premier, we know that he has a rather complicated character that does not help conciliation and this is definitely a lack of respect for the Armed Forces, we must put a stop there and demand direct apologies “the first vice president of the Legislative Power, Lady Camones, told Canal N.

The parliamentarian of Alianza Para el Progreso (APP) said that she will send a document to Torres to demand his apologies for expressions that she described as “reprehensible.”

“In a normal country, since the president is Supreme Head of the Armed Forces. and the PNP, what Aníbal Torres said would have meant that Pedro Castillo fired the premier and that ministers from the sector resigned in protest, but since they lack dignity, they keep quiet and remain “stated the Popular Force congresswoman, Tania Ramírez.

LOOK: This is how the camera and accessories of journalists kidnapped in Cajamarca were recovered

“Resign premier. You do not deserve the position you obtained for being Mr. Castillo’s lawyer, much less the responsibility of Mr. Castillo. You are an enemy of the country and it is shameful to still have you as a PCM”wrote, in turn, Jorge Montoya of Popular Renewal.

You do not respect your compatriots and you have offended the Armed Forces and that cannot be allowed.

I don’t know what the members of his own council of ministers are waiting for to ask him to leave. (2/2)@pcmperu @anibaltorresv

“If after the statement from the Joint Command of the Armed Forces the Minister of Defense, José Gavidia, does not have the decency to resign, then he will ratify that his institution never mattered to him”indicated, in his turn, Alejandro Muñante, also from Renovación Popular.

Jaime Quito, from Peru Libre, minimized the expressions of Aníbal Torres and said that one should not “tear one’s clothes” for his sayings since “what the premier’s speech is” is already known.

“It doesn’t attract much attention to me. I believe that beyond saying one or another word or tearing our clothes, we must begin to fulfill our functions in the various spheres of the State and public institutions”, he told RPP. 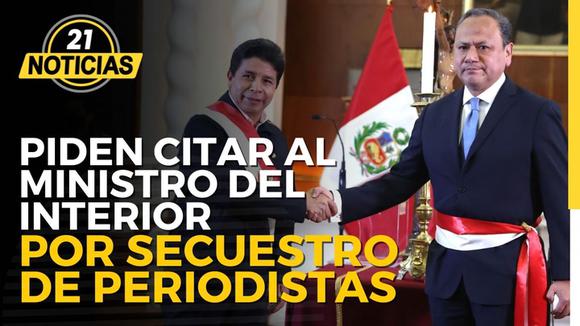 Congressmen speak out against Aníbal Torres for statements about the PNP and the Armed Forces.

The statements made by the President of the Council of

Financial intermediation activities exhibited a year-on-year variation of 6.5% between

“The results of public security policies are better”

The nationalist legislator, a native of San José, Carlos Daniel

UCAB bets on the training of gamers in its new e.Sports academy

The rector of the UCAB, José Virtuoso, believes that this

Joint Command of the Armed Forces responds to Aníbal Torres

Price of gasoline in Arequipa: Check here the prices of this July 8

Fuel prices increased slightly in the last week, after the increase in previous weeks, generating concern

The First Lady, Lilia Paredes, went today to testify before the Public Ministry in the midst