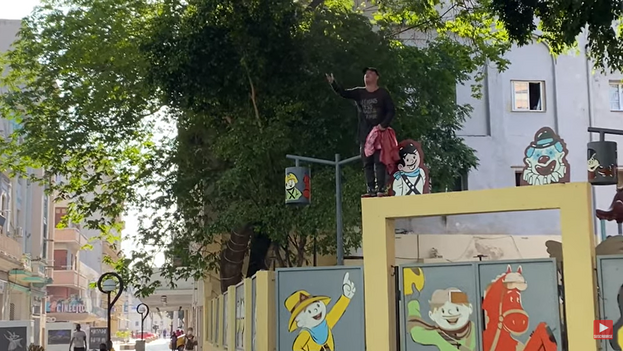 “If you want Fidel to live, well, let Fidel live, that’s your problem. I don’t want to be a communist!” The phrase was heard very loudly early this Thursday morning on San Rafael Boulevard in Havana. Some stood and watched, others recorded with their cell phones.

The cry came of a single man, Carlos Ernesto Díaz González (known on social media as Ktivo Disidente), perched on the entrance gate of a playground located on the corner of San Rafael and Industria, a busy pedestrian area because it includes numerous shops and connects to the municipalities of Centro Habana and Old Havana. A few meters from the place there is also a store in freely convertible currency (MLC).

“He who is a communist must be, but he who must not be respected,” continued the activist in a harangue that lasted for about five minutes

“There has to be no violence, there has to be no bloodshed, but they have to let us participate in the political life of the country,” he demanded. “He who is a communist must be, but he who does not have to be respected,” continued the activist in a harangue that lasted for about five minutes.

At various points in his speech, the man stated: “All Cubans have the right to participate in the political life of the country, whether or not they are communists.” Díaz González is a member of the Archipiélago collective and was arrested in November of last year, the day before the Civic March for Change, for putting up protest posters in Cienfuegos.

“Right now they park two or three there for me to do an act of repudiation, to a Cuban who is raising his voice… But that will continue to be the case until we put ourselves as we have to put ourselves and demand what we have to demand because it is up to us, because we have the right to have rights,” he said, referring to the daily repression of the Cuban regime against opponents or ordinary citizens who criticize the government.

This Wednesday, a few hours before climbing that wall in Havana, Ktivo Disidente I had uploaded a video in which Cubans were invited to a march in favor of the release of political prisoners.

During his speech, the man received shouts of disagreement from some people who demanded that he be quiet, but he did not flinch. “The town is scared dog, the town is terrified: subpoenas, a sector chief above you, a sneak above you. How long do we have to live like this?” He insisted.

“You can buy there,” he warned another who asked for silence from the queue to enter the foreign currency store, where the line begins to form very early in the morning and they sell personal hygiene and cleaning products for the home. .

The man asked for freedom for the Cuban political prisoners and insisted again: “All Cubans deserve to participate in the political life of the country. We must be counted on. Inclusion! An inclusive homeland!” “We don’t have to be forced communists or socialists. Communism wherever it has passed is a disaster. What they are going to put us in here is a North Korea.”

Afterwards, the man got out without offering any resistance and, according to witnesses, was handcuffed and placed in a car. “I don’t know more about this sad story,” said one of those present

The police began to gather around him, but their intervention was hampered by the height of the place where the man was shouting. Finally, more than a dozen soldiers around the corner ordered passers-by to turn off their cell phones or move away from the area.

Afterwards, the man got out without offering any resistance and, according to witnesses, was handcuffed and placed in a car. “I don’t know more about this sad story,” said one of those present.

The protests on that street have a close antecedent. On December 4, 2020, the young Luis Robles also demonstrated on that same Boulevard in Havana, a few meters from where the events of this Thursday occurred. At that time, the activist demonstrated peacefully, showing with his arms raised a banner in which he asked for freedom, the end of the repression and the release of the protesting rapper Denis Solís.

In March of this year, Robles was sentenced to five years in prison and in the sentence the judges justified their decision because the young man maintained a “marked interest in creating a destabilizing environment for the social system and internal economic development.”

Climbing on a wall in Centro Habana, an activist asks for freedom for Cubans

“If you want Fidel to live, well, let Fidel live,

Reflections on the search

One more and another… and five more that appeared “by

After 189 days in detention by the dictatorship of Daniel

Panama will carry out transactions with the use of Cryptocurrencies, they approve in the third debate a bill that regulates them

In the third debate, the bill that regulates Cryptocurrencies in

Reflections on the search

Informative System announcer Amanda Toirac joins the ranks of official journalists who are leaving the island.

(EFE).- The legalization of services with operations in cryptocurrencies in Cuba is a step in the

6- Encounter with Ángel, the gang member who fled from crime

Alejandro Mena Ortiz The entrance to Mexico was incredibly calm, it was as if we were

(EFE).- The United States has not yet sent formal invitations to attend the Summit of the

(EFE).- The battle to put out a fire of great proportions in Minas de Matahambre, of