After the decision of the Departmental Board not to approve the IDB loan for the Municipality of Montevideo, the reactions were of all shades.

Indeed, the deputy of the FA, Bettiana Díaz, expressed that with the attitude of the opposition to Carolina Cosse, and especially of the National Party, “it is that easy to fall down the tribune speech of record in bridge construction used by President Luis Lacalle Por. Celebrating with a goal shout that left thousands of Montevideans living in shit so that Raffo can do a few more press rounds”.

He also said that “the survival of the coalition is costing us Uruguayans dearly.”

At the same time, Díaz questioned that the level of questioning is funny. “They have Sebastián Da Silva who quotes ‘Free Ladies’ in the Senate and they come to tell me that I lower the level for writing ‘shit’ on Twitter”.

As a result of the deputy Díaz citing Da Silva, the white legislator responded immediately: “Dear, I understand that cumbia is very popular for your musical tastes, perhaps for the same reason you refer to the humble people who live in unworthy conditions and to whom your government in Montevideo has allowed to live in those conditions, not for lack of resources”.

Da Silva added: “For my part, I will continue to respect all the people who, despite your opinions, are proud of being able to get ahead in critical conditions. Perhaps it is not the culture that you like, I call it work culture”. 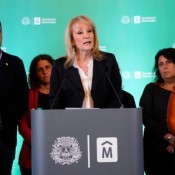 Cosse: Denying IDB loan is an injustice against all Montevideons

The Departmental Board of Montevideo rejected by one vote, the request of the Intendancy to…

Bettiana Díaz: “They celebrate with a goal shout that left thousands of Montevideo living in shit”

Bettiana Diaz (MPP). Photo: File. After the decision of the

Nancy Colmenares was a primary school teacher and the mother

3-0: Palmeiras wins the derby against Corinthians

The palm trees thrashed this Saturday 3-0 at Corinthians in

Photo: Press. In a day held throughout the country, the

The former senator and lawyer Michelle Suárez, died at the age of 39, in the last

Manager of Enjoy: "I see an optimal climate for the development of the economy”

Manager of Enjoy: “I see an optimal climate for the development of the economy” Economy and

The Foreign Minister, Francisco Bustillosummoned the Turkish ambassador to Uruguay, Hüseyin Müftüoğlu, after the country’s foreign

Minister of Foreign Affairs of Turkey, Mevlüt Çavuşoğlu, making a “Grey Wolves” salute to the Armenian

Umpiérrez: The “forgotten Montevideo” is not “the fault of the opposition”

The mayor of Rocha, Alejo Umpiérrez echoed the statements by Graciela Villarpresident of the Departmental for