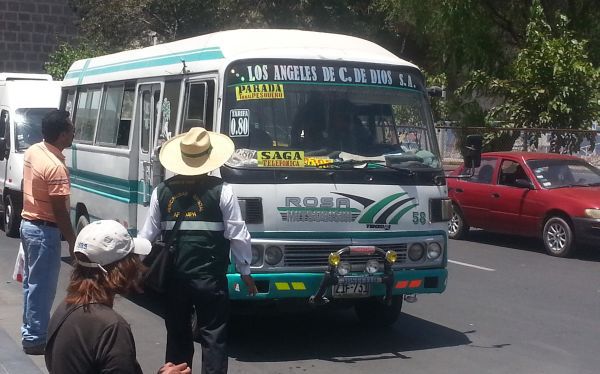 Colonel PNP Carlos Urbina reported that in recent months there had been no complaints from citizens or drivers about assaults or robberies in urban transport units in Arequipa.

“It was heard in the media, but there are no complaints,” said the cash, after meeting this morning with the directors of the urban transport units, taxi and the Provincial Municipality of Arequipa.

READ ALSO: Las Bambas: 50 days without work due to stoppage of operations

Urbina indicated that the modality that criminals use the most are cellphone outbursts at bus stops or on buses, because the drivers circulate with the open doors.

At this meeting it was agreed to give a period of 15 days for the approximately 1,200 buses to install the panic buttonor, alert tool in order to reinforce security and immediately notify the PNP about the assault inside the bus.

Urbina indicated that patrolling will be reinforced and this Friday the operations plan with the identification of whereabouts.

It should be remembered that yesterday afternoon a man boarded a bus on Av. Parra to rob and threatened the driver with a knifebut the vehicle reversed and collided with a building.

Colonel PNP Carlos Urbina reported that in recent months there

Santo Domingo.- The Minister of the Environment and Natural Resources,

The Executive Power is currently evaluating allowing supergas companies to

President Maduro will lead the broadcast on Facebook Live

The president of the Bolivarian Republic of Venezuela, Nicolás Maduro

Edward Palacios, president of the Apurimac Chamber of Commerce, reported this Thursday that his region would

Pedro Castillo made a surprise visit to two schools in Collique

The president of the Republic, peter castlemade a surprise visit to two educational institutes in the

The President Pedro Castillo continues in the eye of the storm. The president’s defense, represented by

They denounce that they erased contest results in the Education Management

Applicants to the call for the Drug Consumption Prevention and Treatment program, carried out by the

Alonso Segura: “There are inflammatory speeches against investment”

In the midst of high social conflict, the fertilizer shortage and the highest inflation in recent