Paraguay became champion of the 30th Promesas del Conosur 2022 swimming tournament, held in the city of Rosario, Argentina, from October 28 to 30 of this year.

Among the highlights of the tournament is the young swimmer Cristhiane Añasco Kliemann, from the Children’s category (11, 12, 13 years old), who has contributed to this delegation with a gold medal in the 100-meter breaststroke; mixed medley 4×50m relay and women’s medley 4×100m relay. She also climbed to the podium with the silver medal in the 100m backstroke (improving her personal best), and the bronze medal in the 200m medley.

Cristhiane told us that this is her second call to the National Swimming Team, the first was for the South American Youth Swimming Team, held in the city of Lima, Peru 2021, where she left Paraguay’s name high; and this new call for the 30th Edition of the Promesas del Conosur tournament, where she was able to give her contribution to the medal table.

How did you prepare for this tournament?
In the best way, our coaches guide us and correct us, we have a work plan and we respect that. We take care of food, hydration and also rest schedules, all of this is important to arrive well at the time of the competition.

Were you the only swimmer who was called up from your club?
Seven swimmers were called up from Club Olimpia, all very good athletes: Laura Corrales (12), Cecilia Piraino (14), Sara Ramirez (14), Guadalupe Penayo (15); Laurent Barrios (14), Ivan Correa (14) and myself, Cristhiane (13). We are all part of a new generation that we are forming.

Did you participate in any other tournament abroad this year?
As Club Olimpia, I was able to participate in the Sul Brasil Championship in June, which was held at the Santa Mónica Clube de Campo, one of the strongest tournaments in the region, where I won four podiums; It was in the City of Curitiba PR. 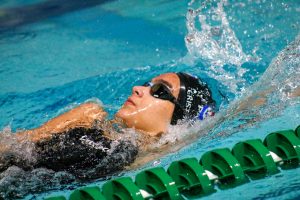 Later in September, I participated in the Estadual de Paraná and Selectiva para Mococa, in the same city, but this time in the Curitibano Club. In this tournament I managed to achieve a State Record in the 50m Backstroke; but since I was invited, my time did not remain as an official record time record in the Paranaense Federation of Aquatic Sports, but it was announced and appears in the CBDA.

What other tournaments do you have left in this 2022 period?
Until now, the only tournament that we already have scheduled is the Third National Stage, organized by the Paraguayan Federation of Aquatic Sports (Fepada), which begins after the second week of December, for the moment my training is focused on that date.

In the first week of December there are also the South American School Games (12, 13 and 14 years old) that will be held in the city of Brasilia – Brazil, if swimming is called by the National Sports Secretary (SND), and I appear on the list Of course I will do my best to leave the name of my school, my Federation and my Country on High.

Anything you want to add?
I want to thank Fepada for making me a part of this wonderful 2022 Promises Delegation, and for trusting me. To the Delegate María Inés Coronel Vargas, the trainers who accompanied us and the parents who took care of us that we do not lack anything. Of course also to my dad and my brother, who were on the other side of the stands cheering on the whole team.

Teamwork made this championship possible after so long, and I’m very happy to have contributed something no matter how small. There are my classmates from Colegio Sagrados Corazones, as this year I have missed a lot of school, they always help me to make up missed classes, and to my teachers and Director, Thank you for always being patient.

Population increases in the state of Florida

Havana Cuba. – An article published in The New Herald

The Argentine president, Alberto Fernandezsaid Monday that the return to

Lula will attend Pelé’s wake on Tuesday in Santos

Lula “he will pay his respects and pay homage to

13% of SMEs in Latin America abandoned the market: What was the reason for this?

They invest 91.6 million balboas for the Caribbean Corridor in Colón

Lula will attend Pelé’s wake on Tuesday in Santos

Lula “he will pay his respects and pay homage to Edson Arantes do Nascimento, Pelé”, and

“I don’t understand how they are so cowardly,” says Fernando Sosa’s mother

Analyst affirms that our country will delve into drug politics, the mafia and corruption if the Colorado party wins the presidential elections again

“There are no words to describe it, it meant everything to football“said the medical engineering technician

Argentina’s toll on the waterway: the measure is branded as “illegal” and “unilateral”

Photo subject to copyright. Voices of protests continue to be added against the measure adopted by