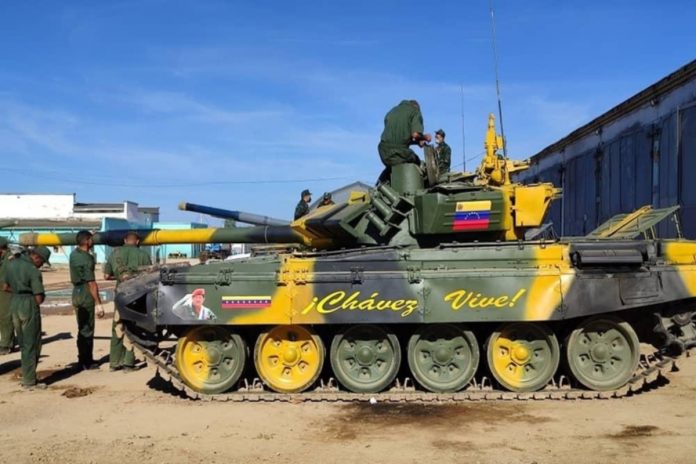 Soldiers of the National Armed Forces began this Saturday military maneuvers hand in hand with Russia, China, Iran, Belarus, Uzbekistan, Vietnam and Myanmar, among others, in Barquisimeto.

The military exercise had the purpose of exhibiting their techniques and capabilities in the use of armored vehicles, AK-47 assault rifles, ammunition, long-distance shooting with snipers and remote-controlled drones, he noted. ABC.

These acts will be held until August 27 and will be held in different locations in Lara state, including the Terepaima Military Fort, where the review of the facilities where the “sniper border” training is carried out, a new modality that premieres in the country.

Likewise, according to information from the press of the Bolivarian force “from the Russian Federation the maintenance and integral preparation of the T-72 armored vehicles was carried out, which will compete in the tank biathlon discipline.”

The Spanish newspaper indicated that this type of event is conducive to the organization of an arms market, which turns Venezuela into the “Persian market” for remote-controlled weapons.

In this sense, various groups of buyers, including criminal organizations, drug traffickers and adventurers, come to acquire the latest developments in sophisticated weapons, points out the ABC.

In addition, within the framework of these military investments, Iran built a factory for drone assembly in Caracas, which were modernized and armed in Venezuela. These teams that were previously known as Mohajer-2, now have the name of Antonio José de Sucre-100 (ANSU-100) under nationalization.

With respect, both Israel and the American chain CNNwarned about Russia’s interest in visiting Venezuela to learn about the weapons capacity of these devices.

ABC: Military maneuvers with Russia, China and Iran promote a ‘Persian market’ for weapons in Venezuela

Soldiers of the National Armed Forces began this Saturday military

Increased the participation of women in the public mining sector

The salary gaps between men and women in mining are

The Whereabouts Discovery Sector of the Baixada Fluminense Homicide Police

Five men who were in a vehicle requested by application disappear

The Brazilian police investigate the disappearance of five men who

Increased the participation of women in the public mining sector

In Mexico, the reinforcement of measures to contain illegal migration has been accompanied by a greater

Maduro invites PSUV bases to participate in the renewal process

The president of the United Socialist Party of Venezuela (PSUV), Nicolás Maduro, invited this Saturday to

They caught two of the band El Dominguito in Barquisimeto

Two members of the gang “El Dominguito” from the state of Yaracuy, San Felipe, who came

This Sunday successfully concluded the 269,000 popular information assemblies of the United Socialist Party of Venezuela