The place in the Los Penocos neighborhood, where the newborn was abandoned.

Accompanied by a girl of about two to three years, a woman prowled the 2nd street of the Los Penocos urbanization, zone of Radial 10, the day on Thursday, until abandoning a baby that he was carrying inside a bag.

A flower box was the place he chose to leave the baby. PIn order not to arouse suspicion, he sat for about 15 minutes until he got up leaving the baby wrapped in a blue towel and a note: “Today he was born at 8:15, it’s a boy, it’s Juan.”

A worker at the building where they left the abandoned baby reported that he left around noon to have lunch, but on his return it was when he found a bundle in the flower box at the entrance of the house; he thought they were coats but realized there was a boy.

Alerted by the situation, he informed the Police to recover the newborn, and while they waited for the arrival of the uniformed men, the neighbors put clothes on him and wrapped him in a quilt.

The masons who work in front of the building where the woman abandoned the newborn, indicated that they managed to see the woman with a little girl sitting in the garden, but they believed that she was waiting for someone to leave the place and they did not realize that she was carrying a baby. 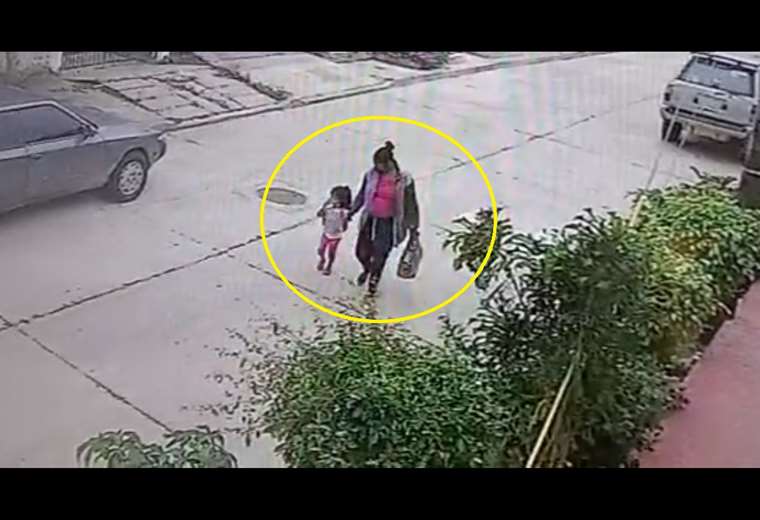 The woman escaping after abandoning the baby.

The security cameras in the area managed to capture the actions of the woman, who was accompanied by a girl. “Yesterday (Thursday) they left him, he is a newborn because he was still with his navel tied upIt’s a chubby boy,” said Victoria Bravo, a neighbor who pointed out that the incident occurred after noon on Thursday.

“She was a chubby lady, she wore a pink blouse and a lead sweater, she was between 30 and 40 years old.. We had never seen her around here, it is the first time something like that has happened around here, all the neighborsWe were amazed because he was a child and they left him without clothes,” said Fabio Fernández.

Workers in the area agree that the woman tried to mislead people, since she stayed sitting in the garden until no one was watching her or noticing the baby she was carrying in her bag.

The Ombudsman for Children and the Police rescued the baby, and began investigations to find the whereabouts of the mother.

Meeting between US and Colombian government representatives

World shock over the death of Pelé: last goodbye to the king of football

MIAMI, United States. – The death of the legendary Brazilian

Victor M. Quintana S. L the decisions on the great

These are the most important news for December 28, 2022

The president of the Inter-American Press Association (SIP), Michael Greenspon,