It was a process of minutes. Not like a bomb, which explodes and voila. The first thing Fernando Faccio noticed was that one of the posters on the wall was leaning. He wanted to close the bars “in case something happened” but they grabbed him by the shirt and threw him back. The poster leaned a little more. And then, yes, everything collapsed: 108 years of family history, pharmacy life, museum, heritage.

The Atahualpa pharmacy was founded by Faccio family at the intersection of the streets Reyes and Millán avenue, back then Villorrio de Atahualpa (Montevideo). It was a time of horses and carriages that went on dirt roads.

The passion for pharmacy arose in Hector Faccio at a very early age. He was born in 1914 and since he was little he spent his free time watching his father prepare formulas. He felt that the pharmacy was a temple, a sacred place with a very particular aroma and the pharmacist a respected and admired person. This universe captivated Don Faccio’s admiration when he was just a child. By 1935 he decided to dedicate his life to this profession that contributed so much to the health of the community.

Atahualpa was one of the few pharmacies located outside the Old City, which helped doctors with their prescriptions and preparations. Neighbors came frequently, since reaching one of the hospitals required traveling long distances with enormous time.

Until today, the Atahualpa pharmacy keeps the family tradition alive. Currently the director is Diego Faccio, Héctor’s grandson, who received The Observer to appreciate what was the reopening of Atahualpa in the usual place after “five long years” located elsewhere. This as consequence of the collapse of March 28, 2016.

The Faccio brothers: Fernando and Diego

The historic pharmacy maintains aspects of another era: high walls and doors, as well as semicircle-shaped windows. But what makes him transport himself to the last century the most is the exhibition on his right: the museum. Eighty-seven years after its founding, the “Museum of the Pharmacy”. There you can see jars containing substances dating from that time, scales, a prescription notebook, some pictures without hanging, more jars of all possible sizes, a photo of Don Faccio from the day he got married, two vases, heads of Geniol, more vials and medicine cabinets. The building is about 180 years old and was declared of historical interest and considered Heritage by Municipality of Montevideo. Inside the pharmacy there are historical articles of the national pharmacy and that is why it is considered a pharmacy-museum. 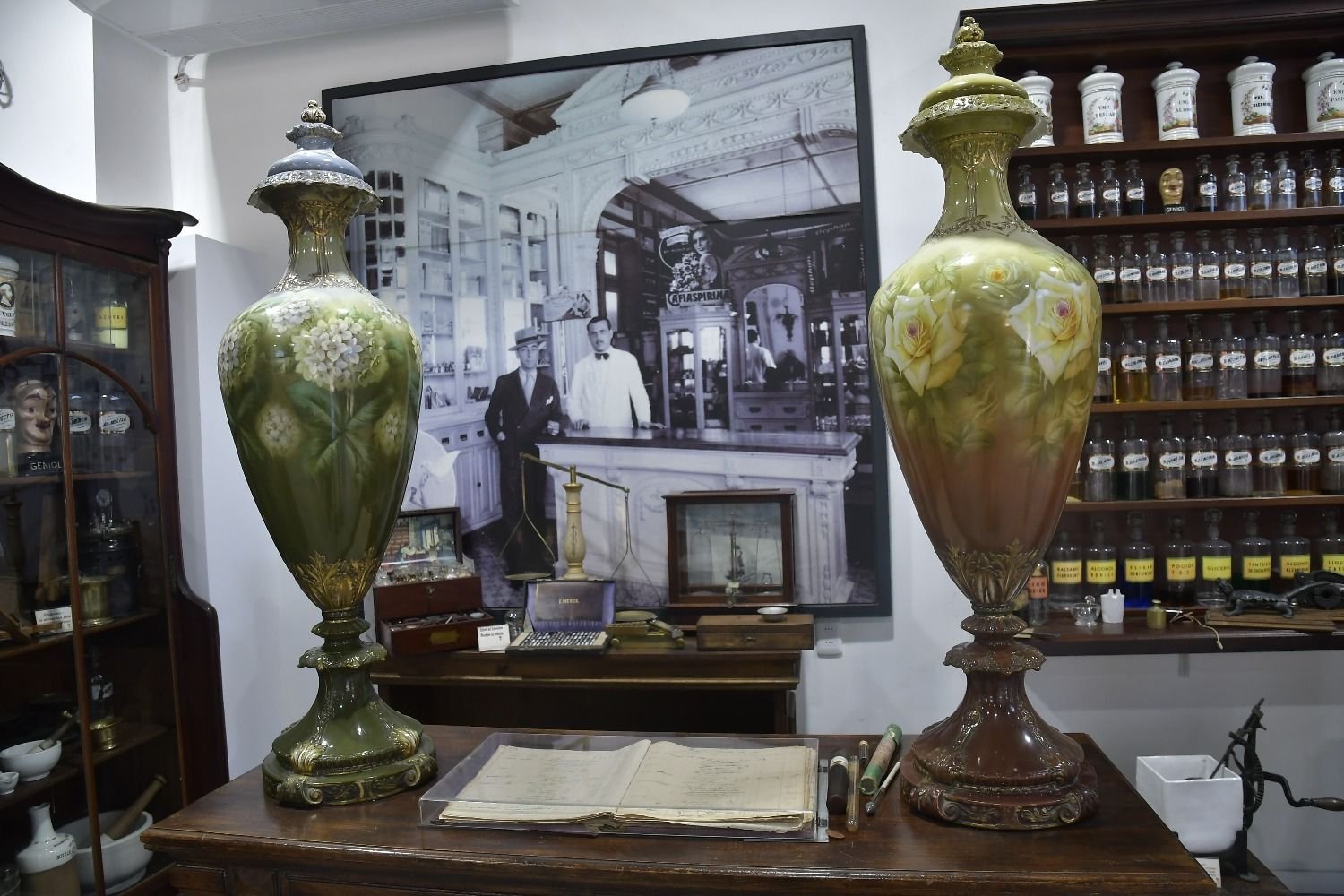 “My father was born in the pharmacy and for eighty years the furniture and products were preserved. It is nice to show these things,” said Diego.

The day of mourning

As told Faccio, OSE made a hole very close to the wall. “We are talking about 50 centimeters and that it was left uncompacted and open for a long time,” he said. The construction was from 1850, that is to say, very wide and strong walls. “OSE made a hole at the height of the basement. The issue is that water entered the walls and the leak weakened the wall.” Faccio commented that they requested several reports from technicians and engineers to find an explanation for what happened. After five years, to this day they are still on trial against OSE for the collapse.

That day, March 28, 2016, his brother Fernando, five officials and a cadet were there. Nobody was hurt. The last customer had left a minute earlier. There was a girl sitting waiting for the bus right where that window fell. Rodrigo, who works in the pharmacy, was the only one who went out the front door, they all went out the back door. Go to the young woman and let her know. Seconds passed from that warning when the wall collapsed.

Faccio reported that they did not have insurance with coverage for landslides. “I think no one has it and it is not offered,” he said and continued: “We were very complicated financially. We were able to rent in front, where we stayed for five years, it is a smaller place that allowed us to be alive.” Two years ago they built the new tower.

Everything collapsed, nothing was left, just a wall on Reyes Street. Being declared as Heritage by the Municipality, they were not allowed to tear down the wall that survived. “We asked them to tear down that wall for a security issue and it was impossible,” he said, adding: “We were like that for two and a half years, it looked like a cemetery.”

The only thing that was saved from that collapse was the museum.

Returned to his place

On October 11 of this year the pharmacy reopened in its usual place, between Millán and Luis Alberto de Herrera streets.

According to Diego Faccio, the essence of the pharmacy is maintained and this has to do with the presence of the museum. The museum now takes up less space than before and the gondolas are no longer made of wood as they used to be.

It was enough to ask him how he feels about the pharmacy for Faccio’s eyes to fill with tears that he did not let fall. “I feel a very strong weight,” he said with a lump in his throat and continued: “It’s like it’s my house or more. I don’t know how to explain it, it’s very strong.”

After its collapse, economic pressures took center stage, but selling the pharmacy was never an option for the Faccio. “We had to die with our boots on, if it had been any other business we should have closed it.” Anyway. He was sincere and concluded: “With the newspaper on Monday I would not have continued with this due to the economic stress that it brought.”

I am another who takes advantage of the charm of

“These moments are hard to explain. Sometimes they are very

Motherboards, chips and other computer parts are in short supply

35th Anniversary of the CAIF Plan

“We are fulfilling the commitment assumed by the Government to prioritize early childhood care,” said the