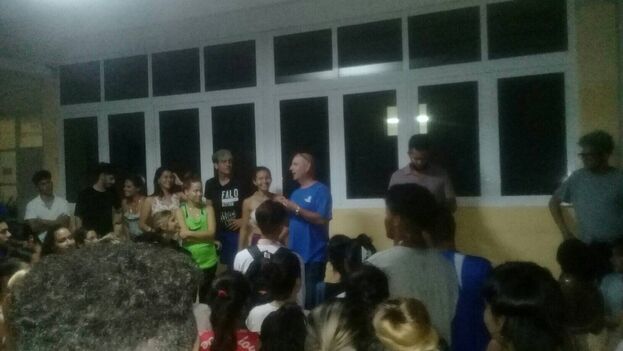 After more than 10 hours without light, the residents of the central campus of the Ignacio Agramonte University, in Camagüey, exploded this Tuesday night in a protest that circulated through social networks and led to the intervention of the center’s management to intervene , even reaching to restore the service.

According to different sources, last night’s blackout was part of those programmed due to the country’s precarious energy situation, and it was compounded by faults in the circuit that increased the usual power outage time. But in addition, the cuts are affecting the water supply and the residents cannot even bathe. Around 7 pm yesterday, the students couldn’t take it anymore and rushed to the door of the building, shouting for the electricity to be restored.

The first vice-chancellor, Julio Madera Quintana, and other university authorities went to the place to talk with the students and at around 11 p.m. the protest had subsided.

The first vice-chancellor, Julio Madera Quintana, and other university authorities went to the place to talk with the students and by around 11 pm the protest had calmed down after the electricity service was restored.

After the videos circulating on social networks with the demands of the residents, who sang loudly “turn on the current, pinga” and “water and current”, professors and officials of the University Student Federation (FEU) and the Union of Young Communists ( UJC) made an effort to show images of the venue with light, adding that everything was calm after maintaining a constructive dialogue with the students. In some cases, the “counterrevolution” was even accused of using the protest to “manipulate” and “distort” what happened.

Several students affirmed that the protest had no political overtones and that they were simply tired of not having the most basic supplies available, but the networks continued to be abuzz with comments about it and the discomfort is far from appeasing.

“It really is disrespectful that we scholarship students have to go to other places outside the residence to be able to bathe or simply wash our mouths because we don’t have water to be able to do everyday things. We waste time and time lost is money, time where we won’t be able to study,” protested a resident.

“We are asking to live with more dignity. I am a witness of the 15 hours without power and the days without water, today not even to drink,” claimed another.

The residents of Camagüey, aware of how they are experiencing the last few weeks without electricity, supported the protest with a multitude of messages. “This is how an entire country is: unmotivated, tired and fatigued by widespread misery. I’ve had a blackout for 11 hours today!” Said an Internet user.

“If they don’t make a scandal, they leave them like this. We’re already going for 14 hours,” said another.

few hours before, President Miguel Díaz-Canel had made reference to the “difficult economic situation” affecting the country at a party meeting where he spoke about inflation, shortages and energy problems.

“The blackouts are going to continue in the coming days,” insisted the president, who last month had said that by the end of May the situation would have improved. “The precision with which we report the programming of these blackouts and the speed with which we are able to warn of any unforeseen situation that occurs is important, so that people have the ability to maneuver and reorder their lives,” he said.

“They do not realize that their mechanisms are obsolete, that the system has not just started because it is not putting a heart in it, it is putting a brain in it, which has been missing for a long time. And it will expand throughout the Island”

The president once again blamed US sanctions for all the problems affecting the country. “We can assure our people that what this whole situation causes us most today is the intensification of the blockade, which remains permanent, remains untouchable. These damages are not caused by negligence, or carelessness, or because there is an intention to annoy or not address every problem,” he said.

But the reactions to the news of the protests in Camagüey reveal that the discourse no longer penetrates the population as intended.

“They do not realize that their mechanisms are obsolete, that the system has not just started because it is not putting a heart into it, it is putting a brain in it, which has been missing for a long time. And it will be expanding throughout the Island. The most illiterate can see that. You cannot live in miserable conditions in which those up there enjoy perks and throw parties at full speed. Understand that the youth is in charge and wants to advance. Not with the guidance of the dinosaurs who think of the cold war and left the heart and the brain in the 20th century. And with the heat that it is, plus the scarcity or total absence of products… That is the perfect formula that you, and nobody else, have created. The fuse was the ordering, which the Americans didn’t bring it,” noted an Alma Mater reader.

After more than 10 hours without light, the residents of

“Their lives are still at risk”, say relatives about political prisoners in El Chipote

Relatives of political prisoners in the Directorate of Judicial Assistance

Deputy expelled from CD, Fátima Agrazal: ‘We never saw leadership from Mr. Rómulo Roux or support for the 15 deputies’

The verdict of the Court of Honor and Discipline of

(EFE).- A man born in Cuba and resident in Hialeah (Florida) was arrested in the Keys

Stoicism seems to be an imprinted trait in the character of the residents of Centro Habana.

The loss of outfielder Roidel Martínez was sung after being excluded from the U-23 team, which

José Basulto, from Brothers to the rescue, sues ‘La Red Avispa’ for defamation

Second request for The Wasp Network (Waspnetwork). José Basulto, leader of the Brothers to the Rescue,

Announced flights from the US to Santiago de Cuba and Camagüey