Carimy Aluan, player of the Paraguayan Handball Team, who together with her family celebrates the silver medal obtained at the XII South American Games ASU2022.

Carimy Aluan (27) and Sergio López (31) are professional handball players, both called up to the Paraguayan men’s and women’s national teams, respectively. She plays in the lateral position number 8, and he plays central number 2. In the ASU2022 games, this relationship stood out for its history of perseverance, and above all for the love and discipline that they apply to the sport, values ​​that today instill in his two daughters, Olivia (6) and María Felicia (1).

“I lived this magical moment with the love of my life, who did not hesitate for a second to support me and support me. We were together throughout the process with a lot of sacrifice, dedication and effort to reach our goals. My family always guided me in this world of sport”, expressed Carimy excitedly.

For his part, Sergio stressed the good performance on the field of the women’s team, taking into account that handball is a sport that does not receive much support. “I was happy because my wife achieved the goal, they got a medal and in the best way. This was satisfactory in every way”, said López, who pointed out that the girls left Paraguay on high.

Cari, as her friends and family call her, also thanked her teammates for making her feel “at home” fighting together, side by side. She highlighted the support of the entire coaching staff and the leadership that provided the necessary tools and support to the players. “The medal is the harvest of a lot of sacrifice and a lot of work. It is proof that if you have a dream or a goal and you work for it, you can get there no matter what, it doesn’t matter if you have children or injuries”, said the athlete.

FROM FRIENDSHIP TO LOVE
Carimy and Sergio’s lives crossed paths for the first time 13 years ago when they both played in a sports club presided over by her mother. He had recently emigrated from his hometown Pilar to settle in Asunción
following the dream of playing at a professional level. From that moment they began a beautiful friendship that over the years amounted to romance. 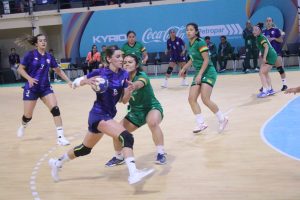 During the first years of their relationship, he had the opportunity to play abroad, for which he lived in Cuba for a few years. Currently, Sergio works in sales and Carimy works as a handball teacher in educational institutions. “When we have practices we take turns, one stays with the girls while the other trains,” said the player.

After the birth of their first daughter, Olivia, they contracted a civil marriage, and seven years later, with María Felicia, the second daughter, on the way, they decided to unite their lives in a religious ceremony. “The best thing about when I have to play is seeing Carimy with the girls cheering from the stands. And if she plays, we are, my daughters and I, her fans, ”says López.

Among the most challenging moments of her sports career, Carimy remembers the postpartum recovery from both pregnancies and an elbow injury that caused her recurring sick days but, as she herself says, without the unconditional support of her husband, it would not have been easy to recover. endure.

Carimy and Sergio are the living example of projection and struggle of Paraguayan athletes and athletes, who, in the midst of routine work, raising and caring for children, show that teamwork, discipline and passion are the base to go far and that, with love and unconditional support, everything is possible.

The Wall Street bank had forecast a contraction of 0.1%

the life of political prisoner Kevin Solís is once again

The United States considers that there are no alternatives to renegotiate the Trade Promotion Agreement (TPC): Valderrama

Dredging will begin in a critical area of ​​the Paraguay River

In this context, the MOPC reported that the awarded signatures

They no longer fit in La Chorrera! They propose that on November 28 there will also be a parade in the capital.

Dredging will begin in a critical area of ​​the Paraguay River

In this context, the MOPC reported that the awarded signatures They already have the “start order

He played 17 minutes and Barcelona must pay him 8 million

Buffon will be 46 years old at the end of his current contract with Parma. Photo:

Electric cars and their revolution

Without approaching or going out into the street, one with imagination can already put together the

The woman, in an ethylic state, attacked her ex-partner because he did not want to resume

In the last three weeks, 26 cases of dengue were identified and 501 were of chikungunya