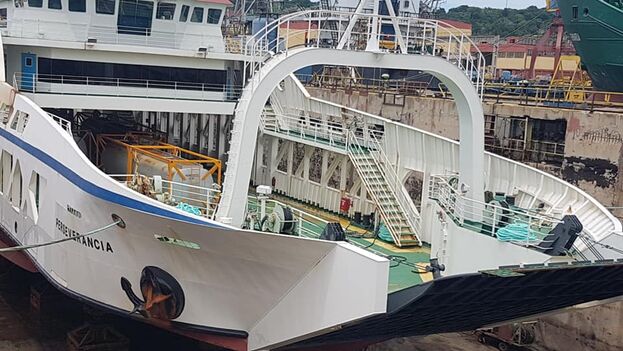 Dozens of Cubans have received with relief the news of the arrival of the Perseverance, a modern ferry announced with much fanfare by the Government that will cover the journey between Batabanó, in the south of the province of Artemisa, and Nueva Gerona in five hours and which will hold twice the load of the current catamarans.

No one knows exactly where it came from, although the National News reported that it was acquired for a “millionaire” amount somewhere in Asia – which most Cubans have understood as China – from where it came to the island by crossing seas and oceans. The report highlights it as an “important litmus test”, despite the fact that the feat is none other than fulfilling the purpose for which it was designed: to navigate.

On the way, “the quality of the propulsion systems and other parameters in general were demonstrated”, in addition to testing other systems and devices of the ship. The new vessel can accommodate 430 people, as well as vehicles and cargo.

Despite the large outlay, the ship was built in 2018 and now must be painted and reconditioned to adapt to Cuban regulations, so it will take several weeks to enjoy it

Despite the large outlay, the ship was built in 2018 and now must be painted and reconditioned to adapt to Cuban regulations, so it will take several weeks to enjoy it. However, the unknown manufacturer agreed with the Cuban authorities to two and a half years of exploitation without the need to return to the shipyard for maintenance tasks.

In the official press, the pineros have received the news with enthusiasm, since there are constant complaints about the connections with the Isle of Youth. Currently, according to official information, there are two catamarans a day that cover the route, but rust problems and other technical problems complicate the departures and their punctuality, causing numerous cancellations and the consequent complaints.

The discomfort of the seats, the poor gastronomic offer and the delays in the bus connection between the port of Batabanó and Havana, where the majority of passengers go, are also among the great complaints of travelers.

The alternative is on domestic flights, but the Cubana de Aviación crisis and cutbacks due to lack of fuel have reduced the possibilities of making the trip by air.

Dozens of Cubans have received with relief the news of

In addition, the areas of neonatal therapy, postpartum recovery and

They denounce a new wave of repression in Nicaragua against journalists

They denounce a new repressive escalation against Nicaraguan journalists. The

ANEP joins protests, they will picket during their lunch hours

Although they will not stop work, the members of the

Hundreds and hundreds of people in single file, from one bank to the other of the

Cuban opponent Guillermo Fariñas, released four days after his arrest, prior to 11J

The airline Air Canada will connect, as of October 28, Tokyo and Havana with a stopover