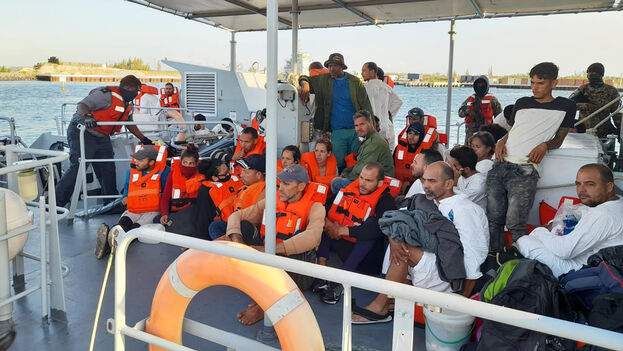 The United States Coast Guard returned 14 rafters to the island on Monday, according to posted on Twitter. The Cubans, of whom no further details were offered, were returned on the ship william trump “after being rescued due to safety issues of life at sea”.

With this group of returnees, there are 28 people that the Coast Guard has returned by sea in four days. The last Friday led 14 Cubans to Havana who were intercepted in three separate events off the coast of Key West.

Since last October, more than 1,000 Cubans have been intercepted in US waters and more than 30 repatriation operations have been carried out, according to Coast Guard reports.

On Sunday, the ship’s crew Mohawk moved 25 rafters to the Bahamas and handed them over to the Royal Defense Force. These people were arrested in four actions off the coast of Florida and the Bahamas. This group joined at 17 who were taken to the archipelago located in the Atlantic Ocean on board the ship Elbow Cay.

Since last October, more than 1,000 Cubans have been intercepted in US waters and more than 30 repatriation operations have been carried out

Among the 42 Cubans, 35 men and seven women, there is a pregnant woman. They are at the Coral Harbor base, where “they received medical care and were handed over to the appropriate law enforcement agencies for further processing,” according to a post of the Royal Defense Force.

After the Coast Guard released the suspension of the search for the disappeared of the shipwreck of a raft from Cuba that occurred last Thursday south of Key West (Florida), it was learned that the boat left the island with 19 people last Monday, as spread Telemundo. And of them only six were rescued alive and the body of one person was recovered.

Among the missing castaways is Xampier González, as confirmed by his brother, Orlando, to the television station; in addition to several residents of the Havana neighborhood El Trébol, who expressed their sorrow on social networks for the accident suffered by several young people. “El Trébol is in mourning for the tragedy that happened to some friends of mine who came out with a dream of reaching the United States,” user Eduardo Ortiz posted on Facebook.

The United States Coast Guard returned 14 rafters to the

Although he was appointed alternate representative of Nicaragua in the

Psychologist Damaris Samaniego: ‘Children who are invalidated, attacked or treated without affection can go to the other side’

Regarding “bullying”, he said that one speaks “that

Cafiero and Taiana together with their peers from Chile at

The Cuban regime has deployed a policy of "extreme horror"

The protests in Cuba continue to increase. As documented by the Cuban Conflict Observatory (OCC) in

As of this Wednesday, April 6, it will not be necessary for international travelers to present

Alberto Corzo, executive director of the Cuban Institute for Freedom of Expression and the Press (Iclep),